Home/Tales of a Beautiful Nation/Amalfi’s Coast; timeless dreams of an outrageously lavish vacation
Previous Next

Flights of fancy in the glorious Amalfi’s Coast

Anyone who has visited Amalfi – however fleetingly – will tell you that its reputation as one of the most beautiful and awe-inspiring Italian destination is no boast. Even the italian name of its coastline – “costiera amalfitana” – evokes a powerful aura of prestige and deep fascination. Amalfi’s Coast is a dream of beauty unrivalled, one of the genuinely breath-taking Italian views that never fails to amaze visitors and locals alike with its lush colours and unfathomable wonders.

Unsurprisingly, Amalfi’s Coast was recognized as of 1997 as a World Heritage Site by UNESCO. Stretching over the Salerno Gulf, from Positano to Vietri, it encompasses some of the most suggestive Campania towns beyond Amalfi itself. As a holiday or vacation resort, it’s both eminently fashionable and exclusive, bestowing many a surprise – and more than just one gift of beauty – onto the visiting tourists drawn to its incredible landscapes.

Take a tour of this coast of wonders with Italian Luxury Consulting’s picks and suggestions. You can opt to visit just one or two of these absolute must-see – or you can stroll freely from one to another at your leisure. It will be worth your time – all the more so when you rely on the experience and skill of a bespoke tour operator to make the most out of your Amalfi Coast’s vacation.

There would be many reasons to visit Atrani even if it was not ripe with artistic and historic treasures, including some monumental churches which date back – sometimes – to as late as the X century. Indeed, the religious roots of Atrani run deep, as the town used to be littered with shrines and churches up to the great flood in 1343 (described in one of Francesco Petrarca‘s Epistles). If a great many treasures were lost to the fury of the raging waters, what remains today is by no mean less magnificence.

And yet it is the unique atmosphere of Atrani that’s even more likely to mesmerize the visitors. Highly suggestive, with its antique streets perched right over the shoreline, Atrani is a jewel preserved and encased in time, a fishermen village which has retained its integrity through the centuries. Walking its streets is like diving straight into the past, and one reason why you should not pass this enchanting corner of Amalfi’s Coast by. It’s well worth a visit – and it might captivate you to the point where you’ll want to return. 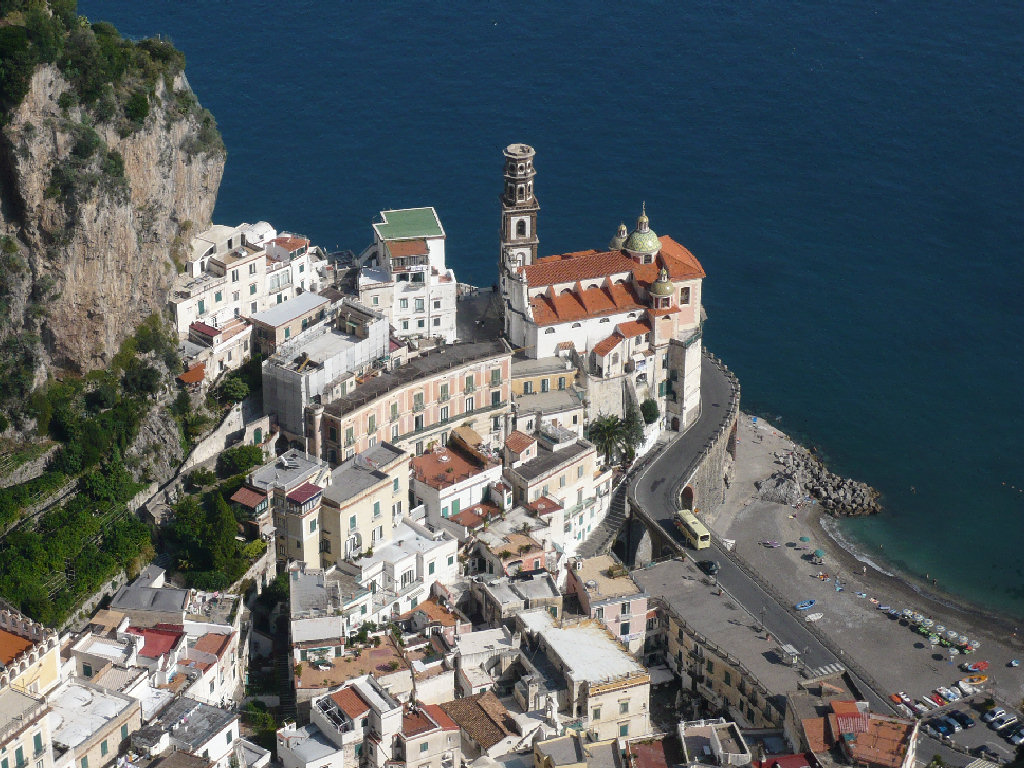 Perched over the sea, Atrani is a lesser known but historically rich town in Amalfi’s Coast

A moon-drenched retreat in Furore

Furore is another one-of-its kind town that you can’t miss if you plan to visit Amalfi’s Coast, even if just on the fly. With its quiet, reserved setting which seems to linger in an otherworldly enchantment, it is no wonder that Furore made such a powerful impression on director Roberto Rossellini and actress Anna Magnani. Enamoured with its idyllic and rural beauty – the kind of bare, essential fascination that goes hand in hand with a dream-like coastline – the world-famous couple would often seek out Furore’s atmosphere in their retreats from the public scene, and to date their heritage lingers in a small museum dedicated to their life, love, and work.

Furore is also intensely romantic, with the seaside bathed in glimmering moonlight and the water’s silver ripples reflecting the town’s lights and colors. A yet more suggestive experience might be savoring a fine dinner in one of the slew of exclusive restaurants nested under the mountain’s slope, where you can treat yourself with some of Salerno’s most delicious seafood recipes whilst enjoying an enchanted view. Furore is the kind of town that seems to have emerged from daydreams and reveries. We are sure it will capture your heart, like few other itineraries are capable of doing.

Atrani’s rich cultural background notwhistanding, Cetara is one of the historic pathmarks of Amalfi’s coast. Its extremely antique traditions still breathe down the city’s streets with unforgotten vigour, and the influences of Cetara’s past are plainly visible behind every corner. Born as a fishermen village, it retains even to date a strong affinity with fishing, and it’s hardly a surprise that its most ancient traditions all revolve around this essential aspect of its culture. Its very name reflects the fishing roots of Cetara; in the bygone centuries, the “cetari” were fishmongers who mostly traded in tuna and other kinds of big game fish.

A visit to Cetara might lend itself to the opportunity of tasting some unique recipes which have been preserved from the times of old, unchanged in their intense flavor and traditional ingredients. Of these, we especially suggest the anchovies dip (colatura d’alici), a richly flavoured and smooth textured marinate sauce that’s guaranteed to bring out the flavour of pasta – particularly spaghetti. Enjoying this exclusive seafood delicacy, together with  a bottle of prized wine, while your gaze drifts off onto Cetara’s dome in the distance, might very well be one of the peaks of your Amalfi’s Coast tour. 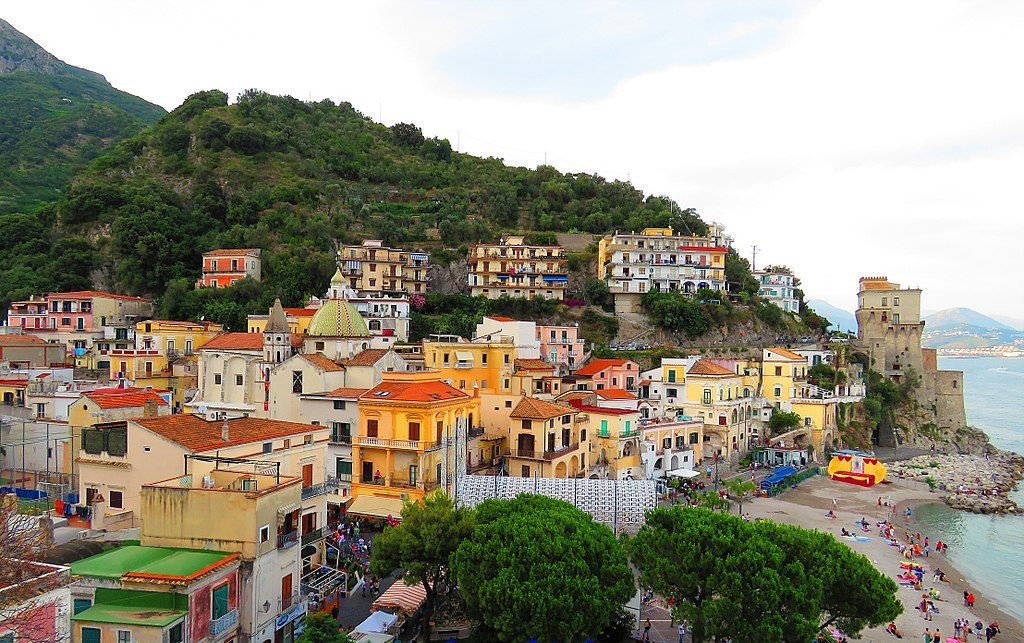 Ravello; discovering the architecture and culture of a secret corner of Amalfi’s Coast

Ravello might not be so widely publicized and popular as other destinations in Amalfi’s Coast, but we believe its unique charme and picturesque architecture will leave a lasting impression on you. In fact, Ravello has reportedly been a pole of attraction for many celebrated personalities of the cultural world – including Richard Wagner, Giuseppe Verde and Arturo Toscanini. Its fascinating blend of noble palaces – most of which have been turned into sumptuous hotels and accomodations – with churches and shrines of enormous historical and artistic value, lend it  an all particular appeal.

Walking its streets, the atmosphere is typical of some academic and cultural towns, and Ravello’s rich past becomes much more than an additional surplus. Rather, it’s in many ways akin to a beating, pulsating heart, confering to the town much of its characteristic charms. The opportunities for sightseeing are many, and in fact Ravello represents a secret, hidden jewel inlaid in the glorious frame of Amalfi’s Coast. If you want your stay to be not just glamorous and posh but also culturally uplifting, this is a definite must-see. 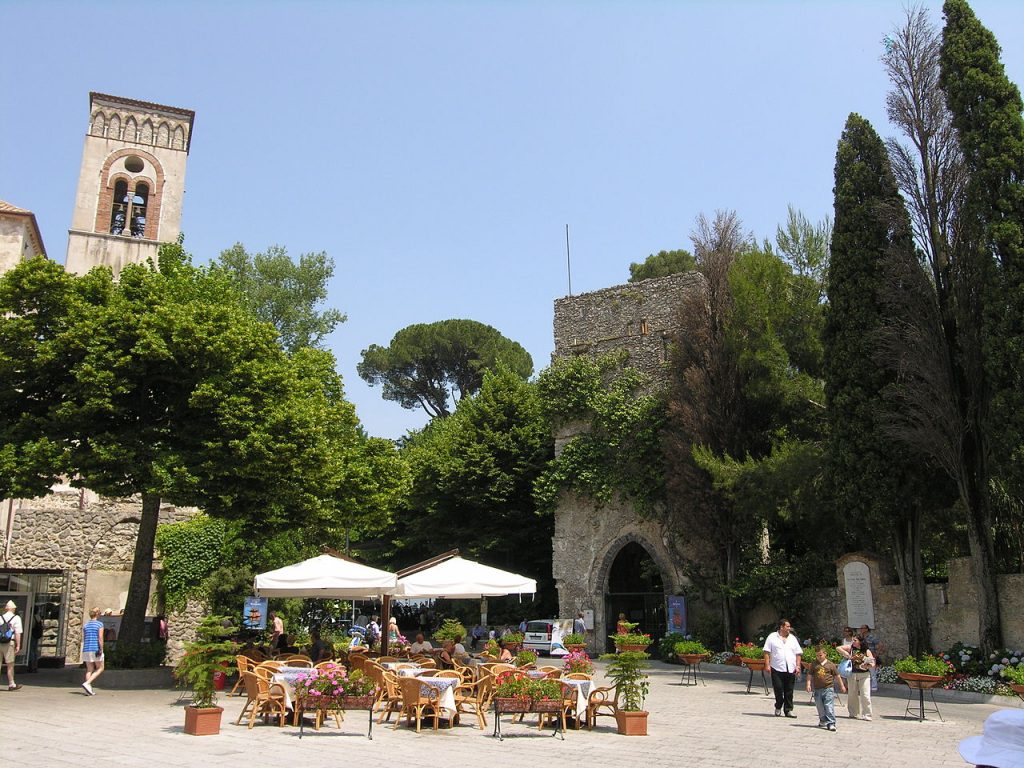