Jump into the fray in Italy’s largest food fight, the Battle of the Oranges in the Piedmontese town of Ivrea, an absolutely must-visit stop in the Carnival season. The most famous food fight in Italy takes place every year in the ancient Medieval town of Ivrea, at the base of the Italian Alps, and involves a huge amount of oranges.

The Carnival celebrations in Ivrea revolve around a colourful procession followed by orange-throwing battles on the cobblestone streets of the town-centre. The famous Battle of the Oranges is a commemoration of an epic skirmish that took place between oppressed locals and tyrannical lords in medieval times.

According to the Ivrea Carnival‘s official website, this tussle has existed for centuries, in one form or another, with beans first, then with apples and now with oranges. 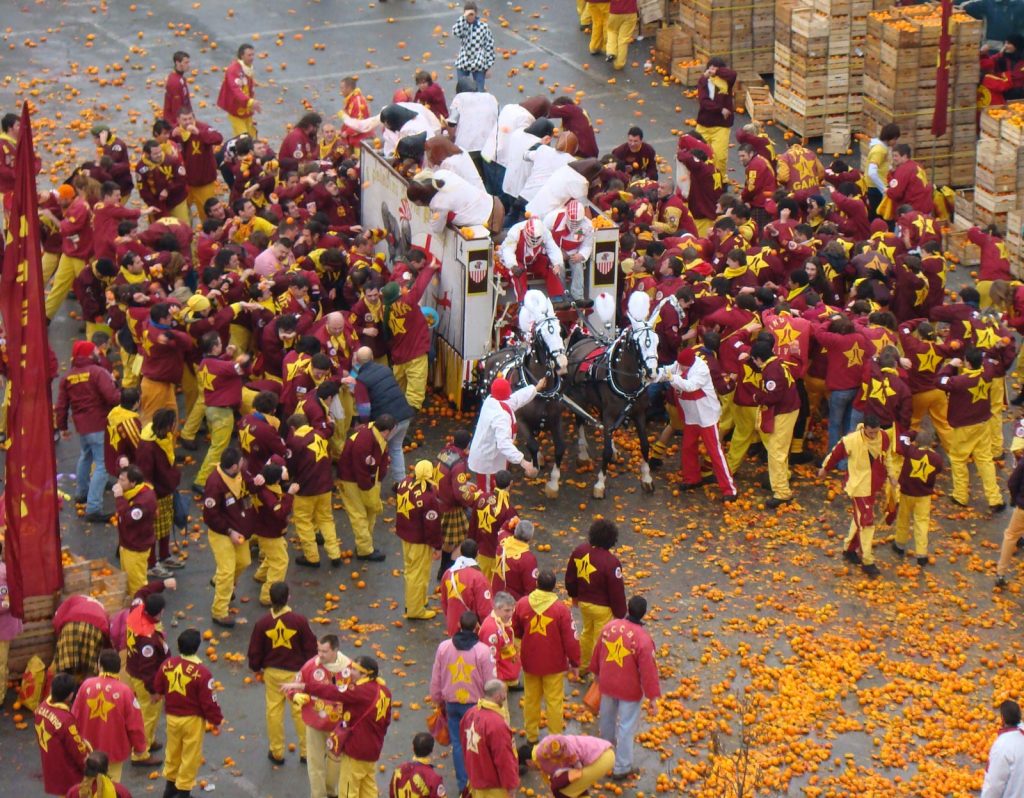 The Battle of the Oranges: a real off-the-beaten-track adventure

Symbol of the orange-scented Ivrea Carnival, the Battle of the Oranges symbolizes the fight for liberty and the rebellion against tyranny of any kind.

Although the tradition’s actual origins are somewhat unclear, local folklore cites the popular tale of a beautiful peasant girl called Violetta, who heroically refused to give in to the advances of a malicious ruling tyrant when he came to her on her wedding night to exercise his jus primae noctis in the 12th century. Violetta defiantly cut the tyrannical lord’s head off with a dagger, and inspired the locals to start an uprising. The city revolted against the monarchy and chaos ensued.

In the re-enactment of that revolt, a local married woman is chosen to play the role of heroic Violetta, and thousands of townspeople and visitors in medieval attire divide themselves into nine combat teams, representing both the revolutionaries and the tyrannical rulers, and throw oranges at each other. Citrus fruits are meant to represent pitchforks, arrows and stones.

There are two types of orange throwers. The ones on foot represent the peasants and the ones on carts with medieval-looking protective helmets represent the tyrant’s army.

As the first horse-drawn cart enters the centre of town, oranges start flying all over the place, smashing against protective helmets, faces, masks and the ground, and the smell of squashed oranges fills the air. Although ancient weapons have been replaced by oranges, the commemoration of this local revolt is extremely intense and attracts excited crowds.

The juicy fight is then followed by a procession with floats and folk and musical groups.

500,000 kilos of oranges will be hurled around the picturesque town of Ivrea from 23th to 25th March 2020. There are three orange fights over the course of four days, on Sunday, Monday and Tuesday.

If you want to get into the historical Ivrea Carnival spirit and join the Battle of the Oranges, contact us and get ready to hurl oranges as hard as you can. There is no age limit.

On the other hand, if you want to watch the show without fruits flying directly towards your face, wear a red floppy hat and rubber boots and you’ll be safe.